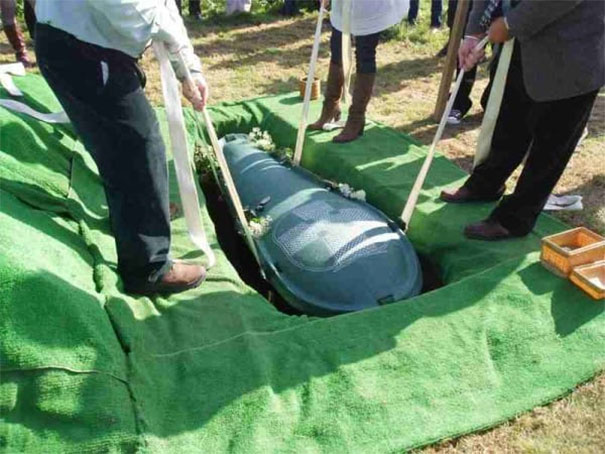 No Comments on Husband Demanded His Wife To Bury His Money With Him And So The Loving Wife Did This- So CleverPosted in People By ynara shinPosted on July 6, 2015Tagged Clever idea ofWife, Clever Wife, died, husband, husband with money, money, money buried

When you die, you can bring everything you have in this Earth because clearly, earthly things have no place to heaven nor hell. However, though we know this reality, there are still people who can’t be stopped to earn so much money more than they need and they put money in the top of everything else in their life including their family.

So what possibly happens is these people could demand for the safety of their money by burying it with them when they die like this man. Days before he passed away, he asked his wife to bury with him all his money and the wife agreed to his husband greedy will.. with a hilarious twist.

He was a real cheapskate when it came to his money. He loved money more than just about anything, and just before he died, he said to his wife, ‘Now listen, when I die I want you to take all my money and place it in the casket with me. Because I want to take all my money to the after life.’

So he got his wife to promise him with all her heart that when he died she would put all the money in the casket with him. When one day he died.”

She had a shoebox with her, she came over with the box and placed it in the casket. Then the undertakers locked the casket and rolled it away.”

“Her friend said, ‘I hope you weren’t crazy enough to put all that money in there with that stingy old man.’

She said, ‘Yes, I promised. I’m a good Christian, I can’t lie. I promised him that I was to put that money in that casket with him.’

‘You mean to tell me you put every cent of his money in the casket with him?’

‘I sure did,’ said the wife. ‘I got it all together, put it into my account and I wrote him a check.’”