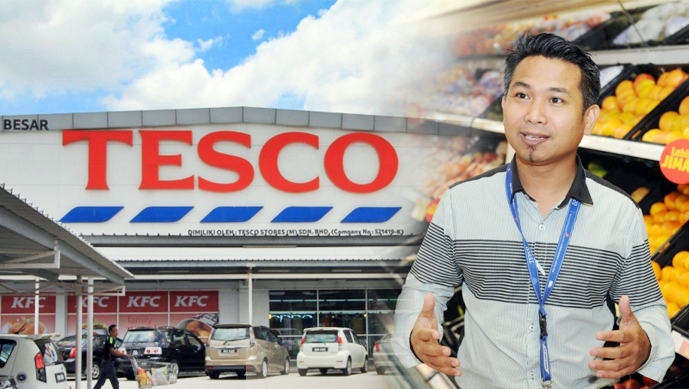 A shoplifter has been caught in a hypermarket in Malaysia but not punished, he was given money and has been offered a job to help him.

According to an article written in Free Malaysia Today, the man that was caught was a jobless 31-year-old man who has stolen fruits and canned drinks.

He was detained by the security personnel of Tesco-Bukit Mertajam branch and asked about the reason behind his stealing. The said that had no money to buy food for his three children who were starving. Also, his wife was currently in the hospital that time after having a miscarriage.

“I had quit my job as a contract worker after my wife fell into a coma during a birth complication last week. She is still warded at the Bukit Mertajam hospital,” the man said to The Star.

“After walking for more than an hour, we went to the food section and I grabbed the pears, apples and a few bottles of drinks,” he added.

After being caught, Tesco’s branch manager Radzuan Ma’asan interrogated the man decided to do a heart-warming thing, instead of being brought to the police, he was given money and even offered to work in the store.

“The man’s situation really touched our hearts. We visited his relative’s house. It was so empty and poor,” said Radzuan.

“He was not a regular thief. When we questioned him, he immediately confessed, saying that he stole the fruits and drinks because his son was hungry,” Radzuan added.

The kind-hearted general manager even let her staff visit the man’s wife in the hospital and knew that she is out of coma. The baby did not survive, though.

According to Radzuan, the store had yet to decide what type of job to offer the man.

“For now, our priority is to ensure that he enrolls his seven-year-old son in a school,” the general manager said.

The store’s spokesperson said they do not condone stealing but, this case was different. They tried to empathize with the situation of the man why he did such thing.

What can you say about this?

Share us your thoughts and comments below. Thank you so much for dropping by and reading this blog post. For more amazing stories like this, don’t hesitate and feel free to visit our website more often and please share this to your friends.